In May 1992, a group of ten couples, led by Mr. Graham Holderness of St. George’s Anglican Church, came together from various denominational, ethnic, and national backgrounds with a common prayer and goal.  Their vision was to establish a Christian international school for Singapore.  Such schools had previously operated in Singapore but were not then in existence.  This group of pioneering parents was drawn from the corporate world, private businesses, mission boards, and interested individuals within the Singaporean expatriate community. They prayed, planned, and worked to carry out this vision of having a Christian school.  The original campus was located at #3 Mount Faber Road.  With the property procured, donations were soon to follow in the form of personnel, materials, and finances from interested individuals, companies, and schools.

On 6 September, 1993, the vision became reality as the school opened the doors of its elementary program to the expatriate community of Singapore under its original name of Christian International School, Ltd. (CIS).  In 1995 the CIS school board voted to become an affiliate member of the Network of International Christian/Community Schools (NICS), which operates a growing network of Christian international schools in East Asia and throughout the world.  That same year the high school program (9th – 12th grades) was added, and the school’s name was changed to International Community School (ICS).

During the summer of 1996, ICS was accepted as a candidate for joint accreditation by the Association of Christian Schools International (ACSI) and the Western Association of Schools and Colleges (WASC).  The accreditation process consists of an in-depth self-study of every aspect of the school and culminated in October 1999, when the joint ACSI/WASC team paid an on-site visit to our campus.  Shortly thereafter ICS was awarded full accreditation for the maximum term (6 years) by both ACSI and WASC.

In June 2001, ICS relocated to 514 Kampong Bahru Road, just down the road from its former Mt. Faber campus. God miraculously provided this campus after the Singapore Land Authority decided not to continue leasing the school the property on Mount Faber.

As the school grew, the facilities on Kampong Bahru became increasingly limited. After five years it was apparent ICS needed facilities to accommodate not just its rising enrollment but also its expanded programs. God again provided for the school by giving authorities at the Economic Development Board of Singapore a vision for how ICS was serving the expatriate community. They arranged for ICS to lease its current facility at 27A Jubilee Road. ICS had its full term accreditation visit in 2012 from ACSI/WASC.  The school extended its accreditation through 2024. The team highly commended ICS for its growth and excellence in providing a well-balanced education for children of the Singapore community. Today ICS features an American-based curriculum and a student body of over 400 children from many different countries.

ICS was founded in 1993 by a group of parents from several different nationalities and walks of life. Their common goal was to establish a Christian school in Singapore to serve the needs of both corporate and missionary expatriates. The school opened the doors of its elementary program to the expatriate community of Singapore under its original name of Christian International School, Ltd. (CIS).

In 1995, the CIS school board voted to become an affiliate member of the Network of International Christian Schools (NICS), which operates a growing network of Christian international schools in East Asia and throughout the world. That same year the high school program was added, and the school’s name changed to International Community School (Singapore).

Today, we have 400+ students and 60+ faculty and staff members. With a low student-teacher ratio, our teachers are fully committed to excellence as well as to the development of the whole student – physically, emotionally, mentally, and spiritually. Our goal is to have an environment where Christ is modeled and taught daily, to educate minds and transform lives to impact the world for the glory of God. 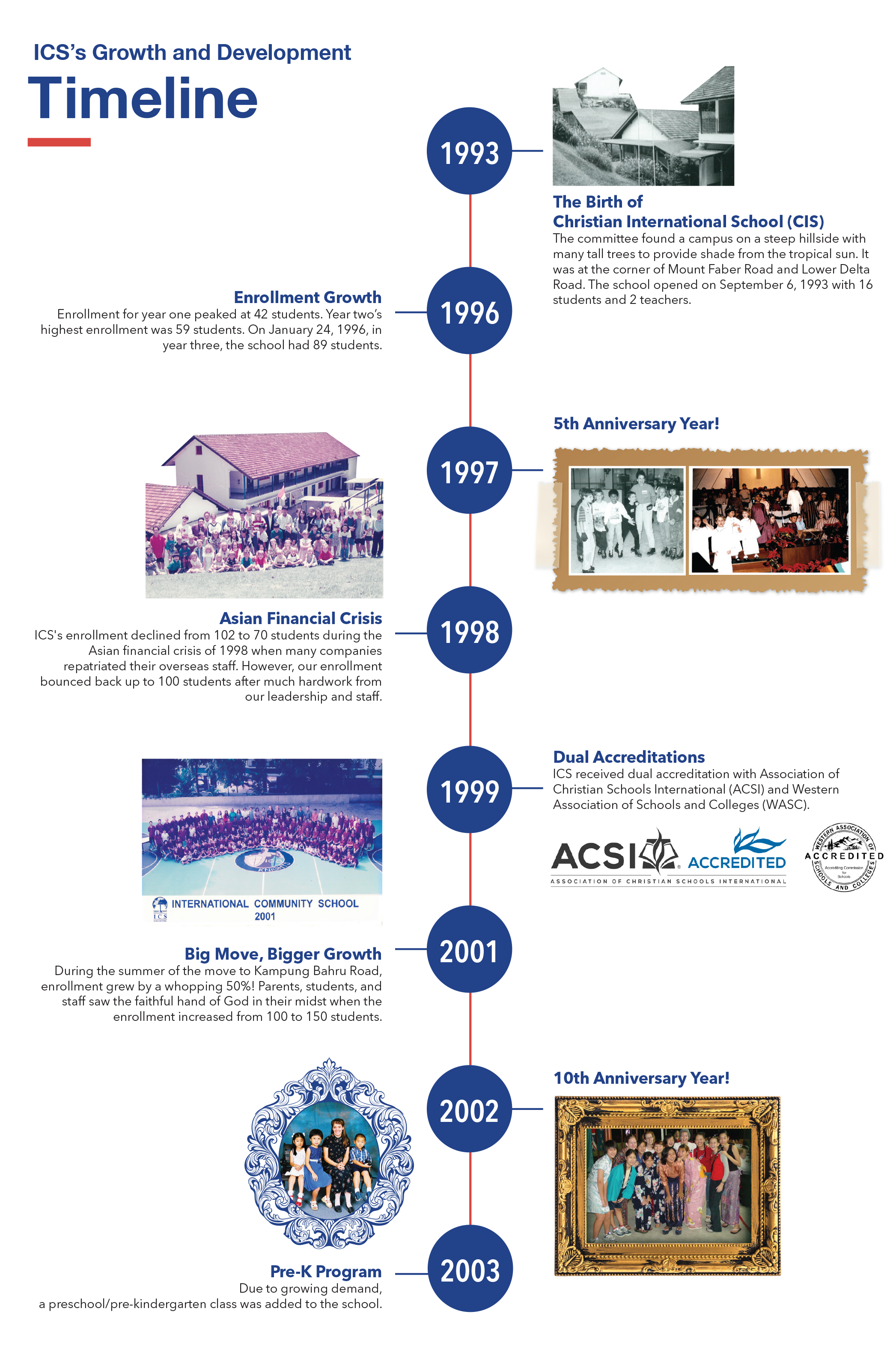 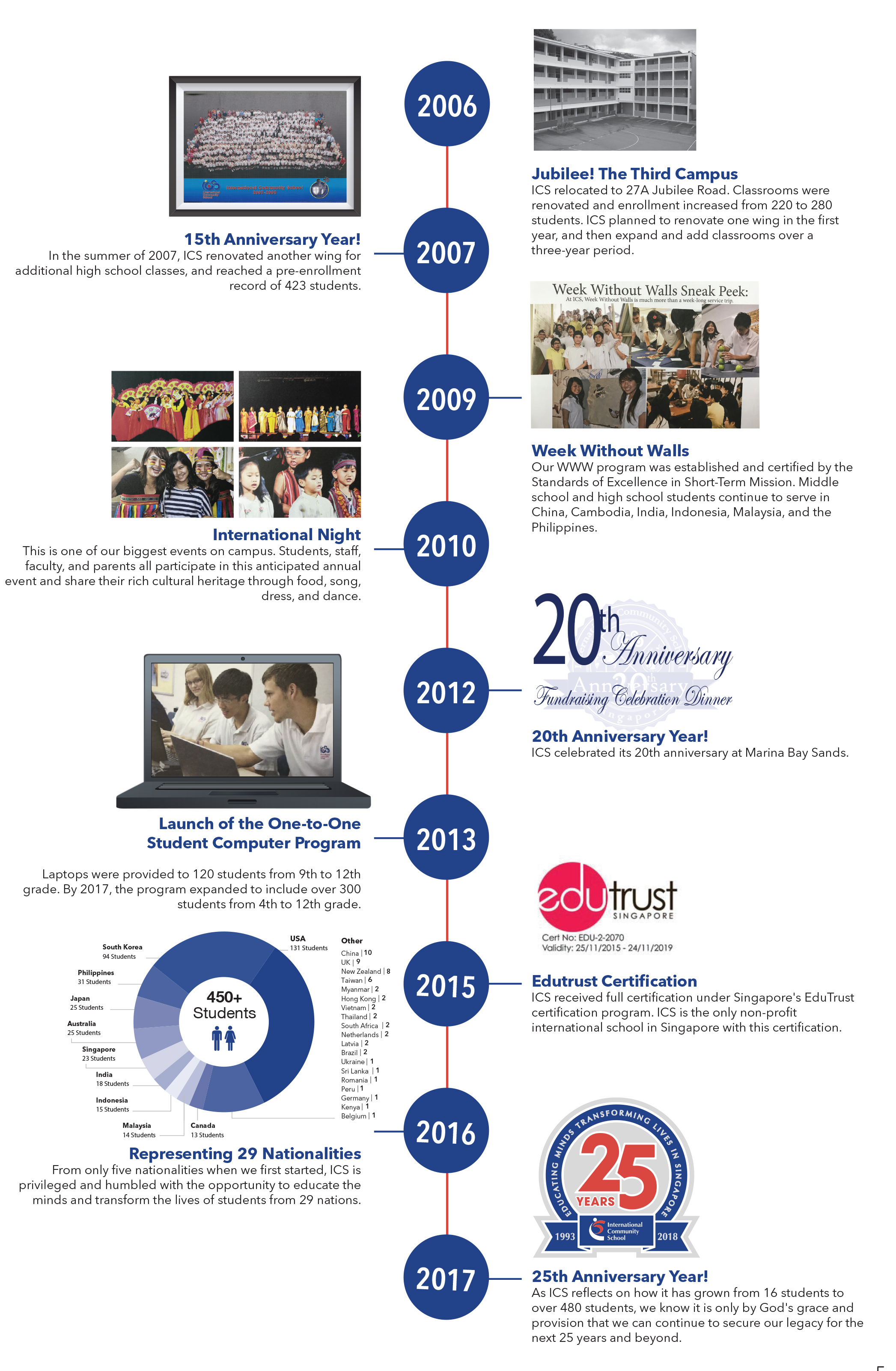 Tuition & Fees
Schedule A Tour
How to Apply
Submit Inquiry